Have you seen First Day Covers with an additional printing on the envelope flap with wordings such as “Dengan Ingatan Tulus Ikhlas daripada…”? Loosely translated, it means “With the Compliments of…”.

What exactly are Complimentary First Day Covers? How can you get them? Do they have any value?

In this article, we will explore the Complimentary First Day Covers since the Formation of Malaysia. Let us just call these “CFDC” for short.

The Malaysian Postal Administration issued the first Complimentary First Day Cover (CFDC) from the onset of the Formation of Malaysia on 16 September 1963. In the early days, the CFDCs were sent to counterparts in foreign postal administrations, retired colonial officers and dignitaries. Some CFDCs were given to VIPs in the country and also given out during official stamp launch ceremonies. These are different than the stamp folders produced and sent to UPU for each stamp issue. Thus in the early days, it is really a VVIP FDC as it is almost impossible for a layman to get a copy. Somehow, some British Postal Officers managed to send to themselves.

The early CFDCs have slowly found its way back to the market through liquidation of various inheritance and estates. Some of the descendants who no longer have interest in philately even sold the collections in bulk to dealers. There is a niche market for collectors of CFDCs as the addressees are usually important historical personalities.

Here is the first Malaysian CFDC. 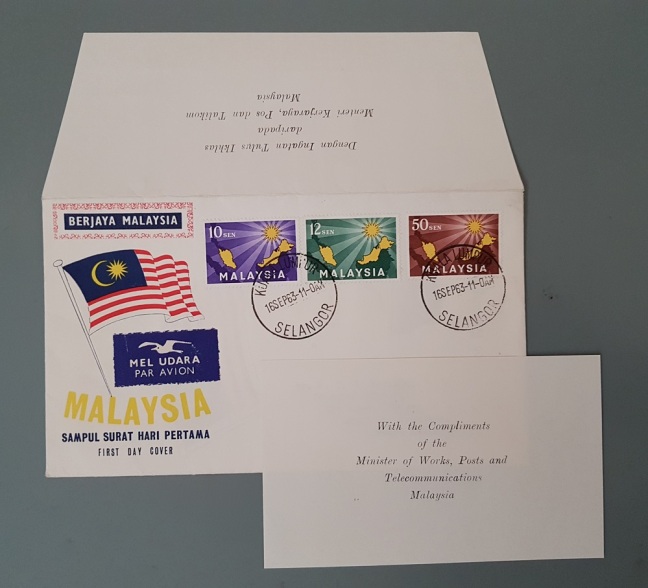 The CFDC includes an insert in English with the text “With the Compliments of the Minister of Works, Posts and Telecommunications Malaysia”. The envelope flap has the same inscription in Malay Language with the text “Dengan Ingatan Tulus Ikhlas daripada Menteri Kerjaraya, Pos dan Talikom Malaysia”.

It is believed that there is a CFDC released for every issue and sent to foreign postal administrations and dignitaries.

Here are other examples:

1965 Birds National Definitive CFDC with the same text in Malay Language. There was no insert in English. No further inserts were noticed in subsequent issues. 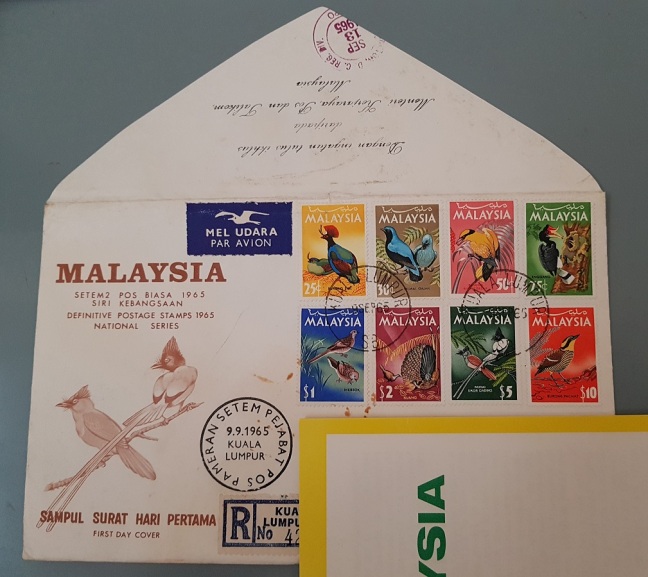 Here is the 1971 Butterflies Definitive CFDC. It was sent as a full Philatelic set to a foreign postal administration head. Note that the Minister’s name “Tun V.T. Sambanthan” is included. 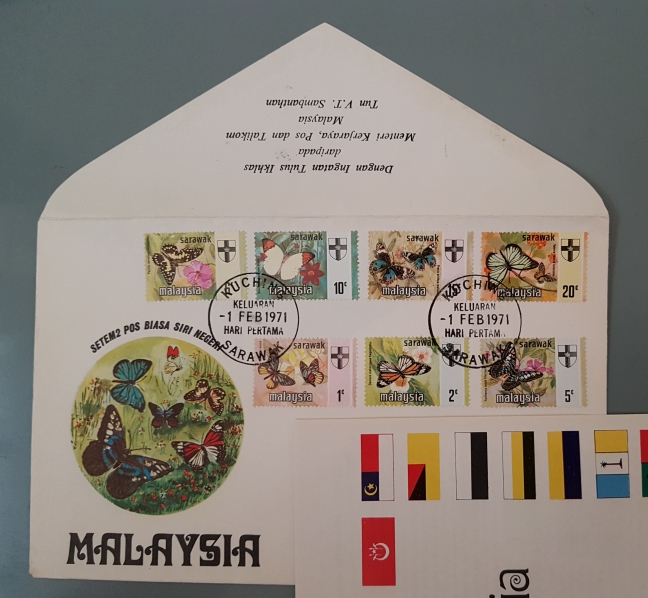 Subsequently, there were more CFDCs given out for the following occasions:

Thus the modern CFDCs are much more common. The most common are those given out during AGMs! Imagine the room full of shareholders, each with a CFDC! 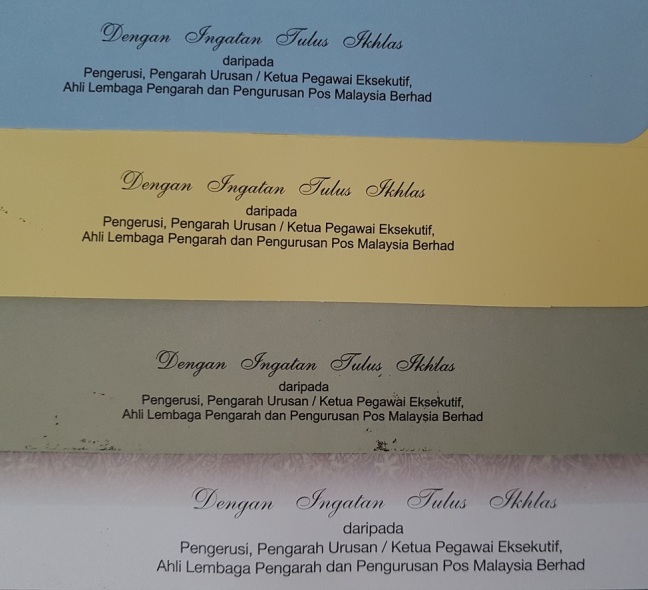 Thus the modern CFDCs are less “VIP” in comparison to those in the past.

Were there CFDCs pre-Malaysia? Yes most certainly. Here is one issued in 1958 for the ECAFE Conference with the additional insert “Dengan ingatan tulus ikhlas daripada Menteri Kerja Raya, Pos dan Talikom Persekutuan Tanah Melayu” or “With the compliments of the Minister of Works, Posts and Telecommunications Federation of Malaya”. There is no text on the envelope flap. 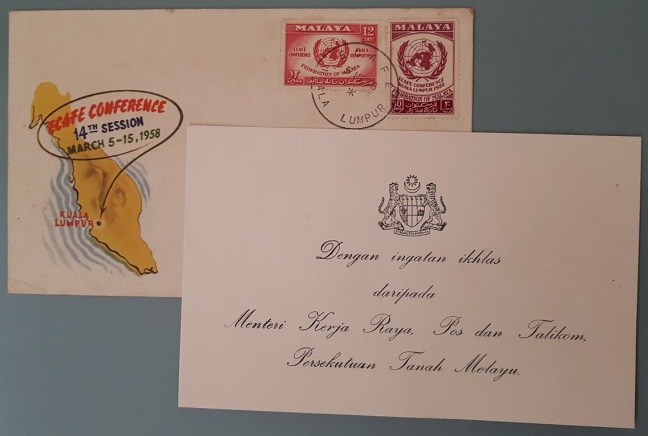 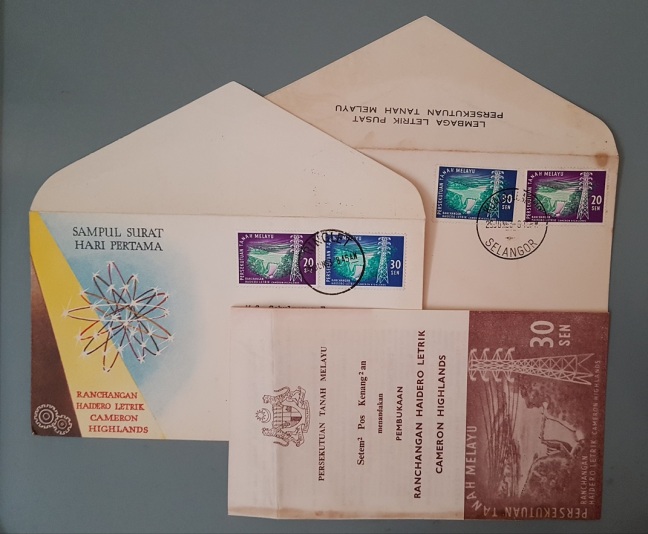 HOW MUCH ARE THEY WORTH?

How much are they really worth? It really depends on supply and demand. The old CFDCs are of historical interest. The modern CFDCs are more novelty and still have a following. Some dealers managed to stock up over the years while others manage to get them through contests and giveaways. It is surprisingly hard to put a price for something “free”! Quite an irony considering it was complimentary in the first place!

So, the next time you come across a FDC, turn it around, it might be a CFDC! Or… should you buy shares and go for the next shareholder’s meeting?