Pos Malaysia started the installation of post boxes in unique locations back in 2015. There were official postcards and cachets released in conjunction with the launch of the post boxes.

The Mount Kinabalu Post Box was installed on 08 February 2015 at the Pendant Hut, Laban Rata, Mount Kinabalu. This makes it the highest post box in Malaysia and South East Asia at 3,289 metres above sea level.

This event was covered widely by the main newspapers:

Here are videos on how the post box was installed and the mail carried down:

Here is a cachet through the Ranau Post Office. It was the first day of mail processing after the launch event on 14 February 2015.

Here are the postcards with the Pendant Hut special postmark and cachet. The via ferrata reopened on 19 January 2019 after the earthquake that struck Ranau on 05 June 2015. The Mount Kinabalu via ferrata is the highest in the world!

The second unique post box with a special cachet (*read the trivia at the bottom of this article) was installed at the seabed off Pulau Layang-Layang. It was launched on 07 August 2015.

Pulau Layang-Layang Post Box is the deepest post box in the sea at 40 m below sea level. This is much deeper than the current Guinness World Record of 10 m below sea level held by the underwater Susami Post Box in Wakayama, Japan installed in 1999. I guess Susami has a challenger now!

Watch the video of the installation: https://www.youtube.com/watch?v=DduqNOD6_Dc

Here are the official postcards with the special cachet:

The official postcards have long since been used up and subsequently the resort sells their own non-waterproof postcards.

The third unique post box was installed at the Southern Most Tip of Continental Asia at the Tanjung Piai National Park, Kukup, District of Pontian, Johor! The post box was launched on 10 April 2016.

This is the official pre-stamped postcard along with the cachet. This is the first edition of the postcard. Subsequently a new design was released sometime in 2018.

The fourth unique post box was installed off Mensirip Island at the Sultan Iskandar Marine Park, District of Mersing, Johor. The post box was launched by HRH Sultan Ibrahim, Sultan of Johor on 22 August 2016 at the depth of about 9 m below sea level. This is the first Royal Post Box in Malaysia.

Here is the video:

Here is the waterproof postcard:

There is something more unique about the Sultan Iskandar Marine Royal Post Box, if you are unable to dive to the post box, there is a land based post box to do “dry land” posting! 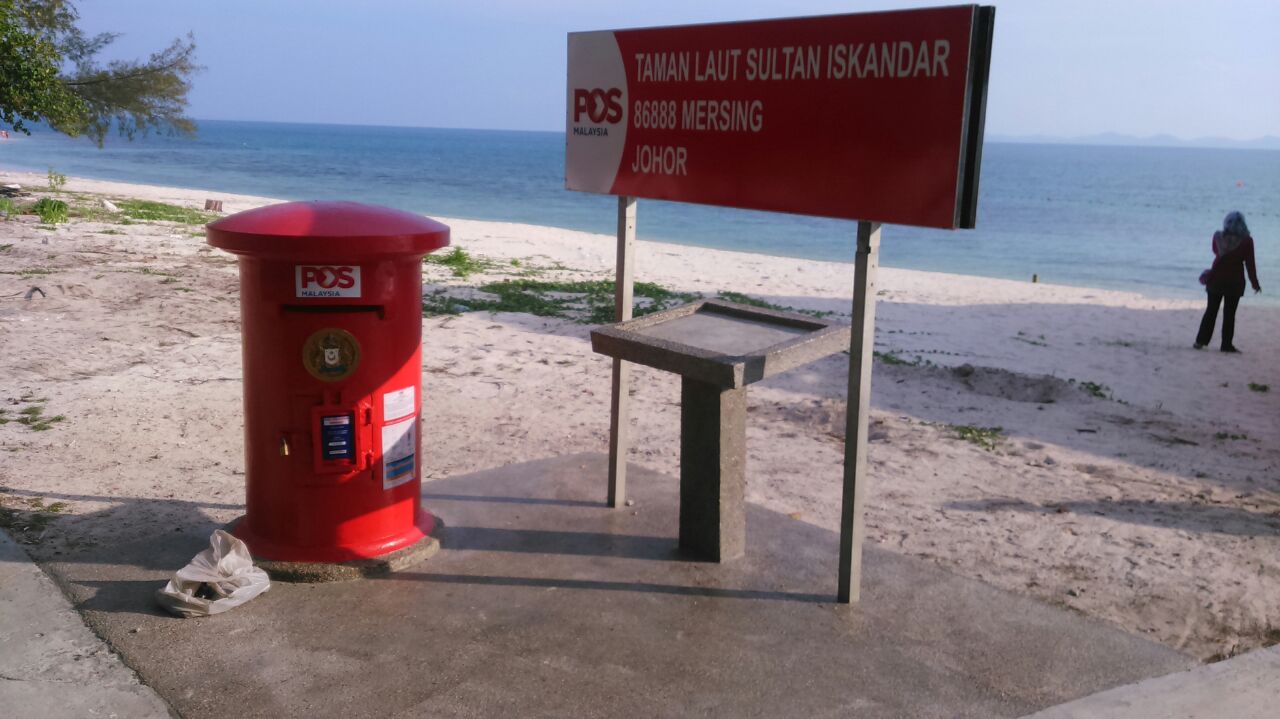 This is a non-waterproof postcard from the dry land post box! It carries the same cachet as the underwater post box. It was in operation a day earlier on 21 August 2016.

A post box was installed inside the Deer Cave. This is the first post box inside a UNESCO World Heritage cave.

The second post box was installed at the park headquarters.

The Malaysia Book of Records recognised this achievement on 14 March 2019. http://malaysiarecords.com.my/records/16972/FIRST-POST-BOX-IN-UNESCO-WORLD-HERITAGE-CAVE-

The Deer Cave entrance is famous for the profile of Abraham Lincoln which is also the cachet of the park. The cachet is not made by Pos Malaysia.

2. Back in 2006, a private underwater post box was installed off Pulau Mataking:

ps: Links to news portals, blog sites and youtube copyright belongs to the respective content creators. The owner can contact myfdc to remove the links if they desire.