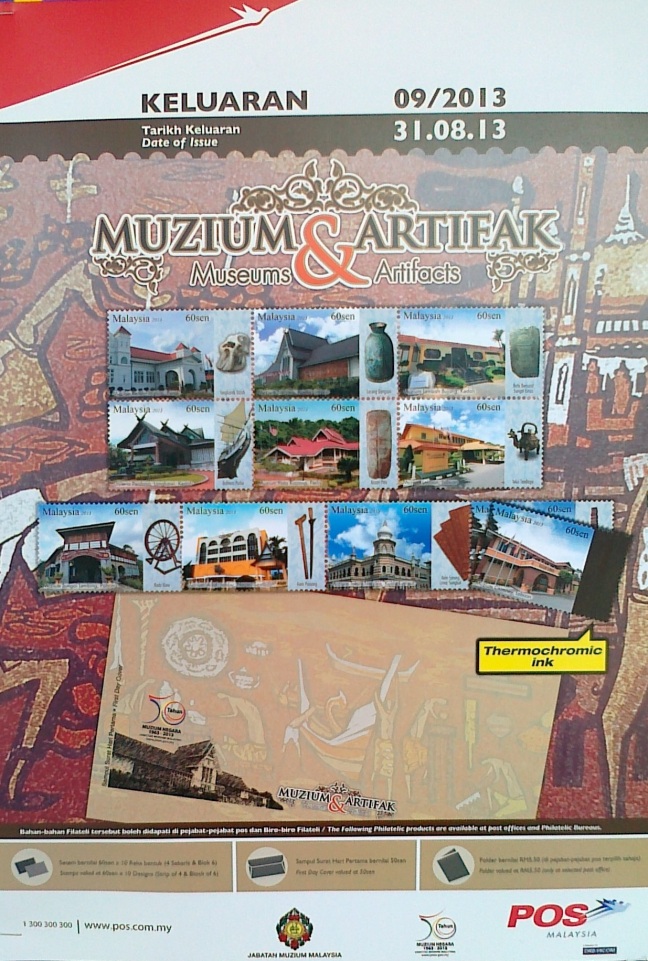 Here’s the scoop: There will be a launch of both Stamps and Coins for the 50th Celebration of the National Museum! This will be on 31 August 2013 (yup, a Public Holiday and a Saturday) at Muzium Negara, Kuala Lumpur.

I guess it will generate a lot of excitement for Numismatist! Philatelists have too much to handle on their hands while Numismatists have had a quiet start to the year thus far. Expect the usual dealers trying to secure their extra stocks. I do not expect much (or even any) sales on that day, perhaps only an official launch. It is supposed to start at 9:00 am. Expect the usual delays.

It will most likely be a next next day cover i.e. 02 September 2013 for the release to the general public. Hopefully there will be more information from Pos Malaysia nearer the issue date.

So here is the Muzium Negara poster:

I am not planning special cancels for such a wide number of area. If there is a launch cover at Muzium Negara, I will try and secure some stocks.

Meanwhile for those of you who would like to secure the concordant locations, they are:

8.   KUALA KLAWANG – Muzium Adat (I would like to thank Mr Chung for pointing out that the nearest available post office is at Kuala Klawang)

I encourage concordant collectors and part time eBay seller/collector to pool resources and sell a few sets online. This way it will reduce the acquisition cost to complete the collection.

Want to know the latest? Just “Follow” the blog. No need to keep searching for the latest news or be left out in the dark.

Here is the latest information that I obtained. Pos Malaysia will be having a counter to sell the FDCs (and cancellations) in Muzium Negara. However, sales will only commence AFTER the launch. From my past experience in Melaka, there is no need to go so early. Pos Malaysia information is about after “noon”. There are no plans from Pos Malaysia to make special cancellation unlike the past Artifacts issue.

Coin collectors, I am sorry I cannot get further information. This is not my area of speciality.

I will load the actual visuals later today of the stamp issue.

Surprisingly when I called up Bank Negara, the customer service line mentioned there is no coin issue… So you best contact those who are specialists in that area.

I called up Muzium Negara and the information is that the event starts at 03:00 pm. The sale of stamps will be after that, probably by 6:00 pm. Muzium Negara will close at 07:00 pm. Meanwhile here is the link to the Muzium Negara event: http://www.jmm.gov.my/ms/sambutan-50-tahun-muzium-negara-0 Give a call if you want to find out more.

There will be a Muzium Negara special cancellation! See you there!

Before I give an update of today’s event, I need a say a BIG THANK YOU to Pos Malaysia for starting the sales earlier! This is good customer service after going through the horrendous Melaka 750 wait!

As usual I have some for sale (this time I made very very few, I am broke):

I am keen to exchange one for one (each absorbing the registered postage) with collectors in the other states with cancellations I mentioned in this article.

Meanwhile, here are some photos from the launch site:

Here is the launch (blocked by reporters and photographers). It ended at about 04:50 pm.

However many of the crowd is actually anxious for the sale of the coins! Yes, the coins were on sale contrary to the denials from so many quarters. Here is the poster of the coins. 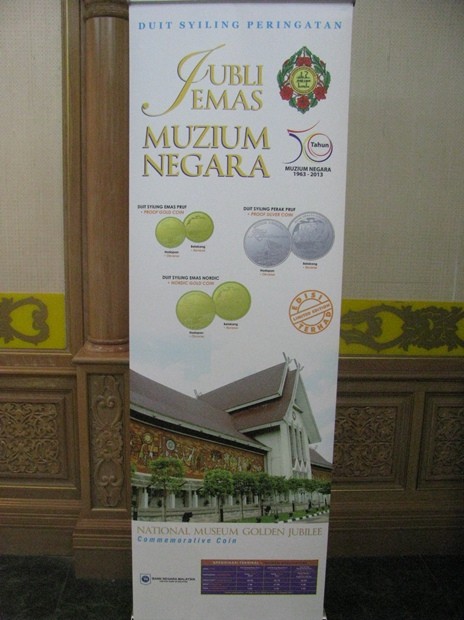 Each person is entitled to purchase one of each of the following:

Make me an offer I cannot say no and you can pick up tomorrow. Preference for collectors only,

Considering that this is the “first” coin issue this year, the crowd was rather large for a Saturday. The usual dealers and their paid helpers were busy edging collectors. Some even brought their kids to increase their quota. Not surprising since coins fetch a larger margin than stamps. Lucky Muzium Negara had their extra security on hand to make a nice straight queue. Something we will not be able to see in Bank Negara after so many years.

The actual sale started at about 05:00 pm, quite to my admiration of Bank Negara. Even though the queue was long, I think everyone managed to get what they wanted – even if those in front had their whole extended family and paid helpers along.

I will stick to stamps. They crowd is slightly more civil and decorous.

Need a tip for Monday (02 September 2013)? This is given in good faith, if you go there and nothing is on sale, it is a decision you need to take responsibility for. Make your own decisions based on information you can get.

Here is the tips: The coins will also be on sale Bank Negara Muzium dan Galeri Seni shop at 09:00 am. Apparently Muzium Negara might be selling the same items at 09:00 am. You can also camp at Bank Negara to be safe. Good luck and best wishes!

This morning the mission was to obtain the Central – South concordant cancels. So the first stop is NOT Bank Negara. I got what I wanted, so had the chance to skip the chaotic queues.

Kuala Klawang was my first stop. It was a hectic morning rush hour before slowly turning into the scenic village drive. I was greeting with a shroud of mist as I approached Jelebu. The town was mid sized, the typical hometown feel. I found the post office after asking around. It was tucked behind a row of shop houses. 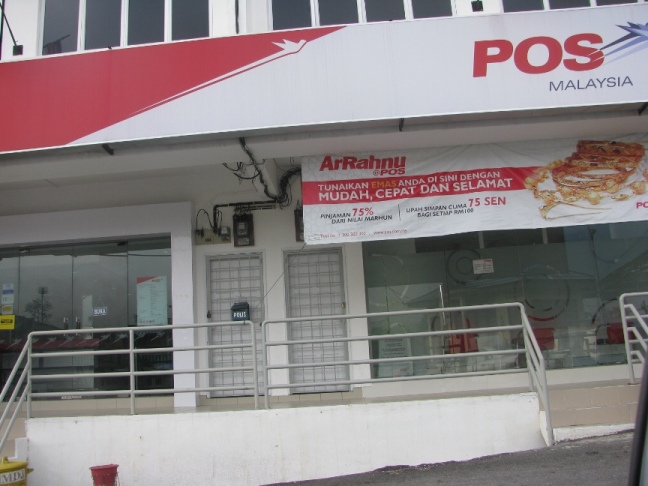 Next, I paid a visit to Muzium Adat. It was pretty nice and sadly under-visited.

I managed to get back to KL late in the afternoon. The Philatelic Bureau was nicely decorated in an old village setting! 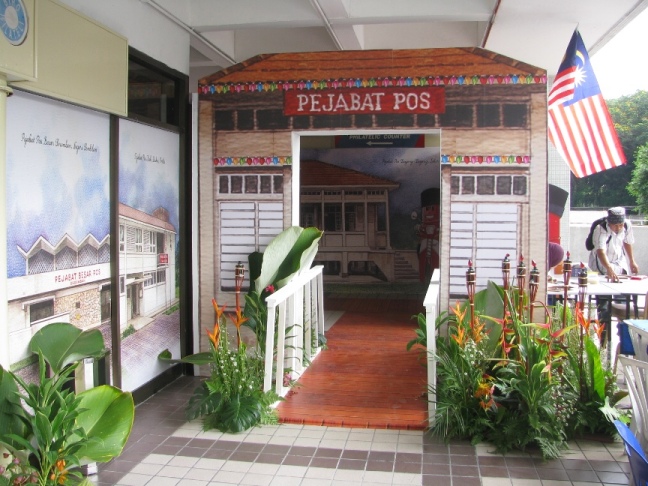 It was then off to Muzium Tekstil Negara.

Here is the final product:

I am still short of the following:

If you are staying near the area and can make the concordant cover similar to the above, I am keen to purchase or exchange.

I mixed up my date yesterday. Should have been 02 September and my mind was still in 01 September. Anyway did you notice that the final stamps (strips of 4) were different than the official visuals (including on the poster)? Another mix up like the Exotic Pets issue?

Your mission, if you choose to accept it, is to compare the image above with the actual sheet!