06:00 am – It is time to start the long pilgrimage. Food, water, petrol, toll card, vehicle checks – all done. Ah, yes, my coffee Thermos.

08:00 am – My friend CKH, who has arrived yesterday, did a location check. One more petrol top-up to save time.

2 pairs of hands are better than one. It was a case of chop and go!

11:10 am – Kuala Lumpur General Post Office – traffic was on our side.

Right about this time the launch event was being held at the side of the Kapitan Keling Mosque in Penang. The tents were laid out on the side entrance facing Bangunan MARA. 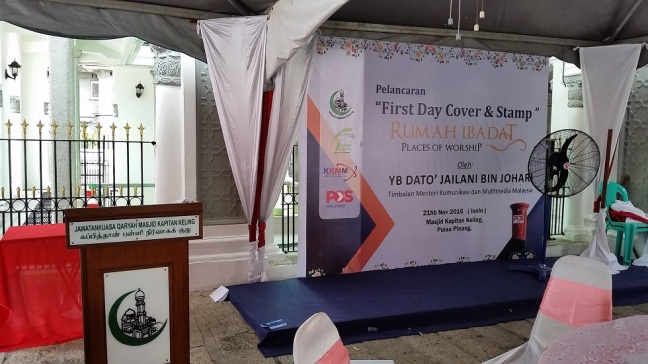 A free postcard was given for the first 150 purchases. The significance of this event is that the postcard marks the 215 Years of the Kapitan Keling Mosque!

In Kuala Lumpur Philatelic Bureau, Mr Mohd Khir Ab Larip on hand to autograph covers at that time. Mr Mohd Khir was also the designer for the Community Postman stamp issue. He also bought 4 sets of FDCs for himself. This time he came with a new canceller complete with his name. Here he is at the autograph counter. 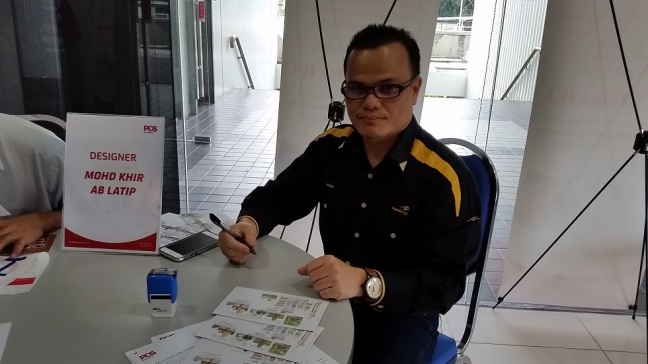 01:35 pm – Heavy rain as we pulled into the Ipoh General Post Office. Met an FB friend who is preparing for covers. Cancellation was swift. Due to the rain, there was not too many persons in the General Post Office. It was a very fast pit stop and we are off. This time petrol and a quick break. Penang here we come!

The rain was heavy and stretched all the way to Gua Tempurung before subsiding as we head further north. This made progress slow.

04:00 pm – We are finally here at the last stop! Kapitan Keling Mosque. The Pos Malaysia sales booth was at the main entrance in front of the mosque.

Here they are, the team from the Kuala Lumpur Philatelic Bureau and Pulau Pinang General Post Office.

The First Day Cover mock up is signed by YB Dato’ Jailani.

Here is the sales counter.

There was a special cancellation for this event. The mosque provided the mosque cachet at the postmarking counter.

Right next to the mosque is Bangunan MARA with the Bangunan MARA post office. Some collectors sent registered FDCs to themselves and their friends.

Another important stop is the Pulau Pinang (Penang) General Post Office. After finishing this last leg, the post office was already closing. Half the shutters were already down. We met more FB friends in the Pulau Pinang GPO. 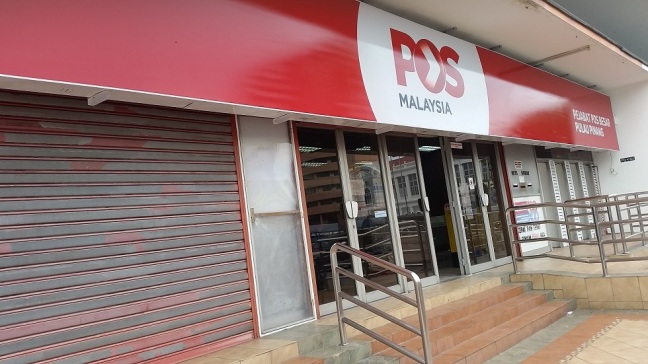 08:15 pm – A well deserved rest at the hometown of my co-pilgrim. The night supper was great considering the long travel today. It was refreshing and a look at what hometowns can offer with a local guide :-).

Acknowledgement: CKH for joining in the fun, 2 Malaccan friends, 4 KL friends and a host of kind strangers who helped out along the way. Thanks Pos Malaysia! Hope you can make postmarking of covers easier! A philatelic journey is an adventure into itself. This is where collectors can study and learn more about the stamp issue beyond the stamps.

Interested in future epic philatelic journeys? Just drop a note. You can start your own or join us.