It was another case of misallocation of stocks with many of my friends calling in to say their local post offices did not have anything. Yesterday I did ask around a few post offices and they are clueless on this issue. In fact this morning there was no poster at Dayabumi Philatelic Bureau and I was worried the issue has been…..postponed!

However it was released on time. The lack of crowd was telling. There was only 1 counter open (and he had to serve the counter until late afternoon). A second counter was opened at close to 8:45 am. The Caring Counter was redundant anyway that was opened as well.

By 9:15 am, there was no more queue! Meanwhile message came in from far and wide of the issue is “postponed”.

I went over to KLCC Post Office in the early afternoon and was greeted with the same statement that the issue was postponed. However the cancellation was available. I was puzzled. Anyway at the time I was there, 3 local collectors and a westerner (who looks like a knowledgeable stamp dealer) was asking about the issue. I pointed out that they should take the LRT to Pasar Seni and it will take about 10  to 15 minutes to get there. The westerner took my advice. I was informed by the staff in GPO that there was a westerner who came after the time I met him.

Here are the 2 types of KLCC and KL covers that I made: 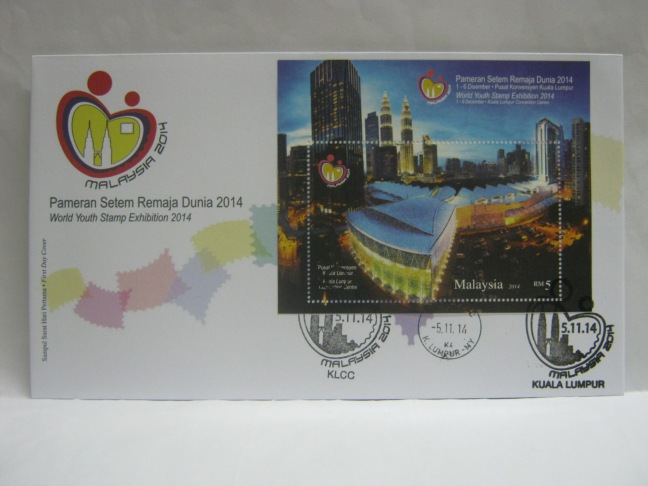 If you want the MS FDC with just Kuala Lumpur cancellation, I have some spares at RM 7.50 each (not listed).

Meanwhile, I have received all the other concordant cancellations on FDCs for the Malay Folk Stories:

1. Sungai Petani (for Merong Maha Wangsa – where Langakusa was set up in Bujang Valley towards the Pattani side).

2. Kuantan (for Tun Teja was from Pahang, I changed my mind and did not make Pekan as I was not able to determine which city she came from)

3. Padang Mat Sirat (for Mahsuri, the location of her tomb)

5. Johor Bahru (for Tun Fatimah, legend has it that she is the first Permaisuri of Johor)

Here is an interesting item. The position of the WYSE logo is different when compared to all official images (including the poster)!

Have a look again at the official MS: