The Medicinal Plants Series 3 will be issued on 20 January 2015. It will consist of the following:

Thus matching cancellations that you can consider are:

I wonder if there will be any launching event cancellation like many years ago in PJ Library.

I bet you will be excited when the image is officially released.

Anyway I need to save money as there are more expensive issues coming our way.

So anyone interested please advise early on quantities, I cannot guarantee quantities but will try and plan out. I do not plan to stock up anymore with a long list of issues this year.

Do drop by much later next week for the official images.

Here is the poster:

There might be a surprise on the day of issue. Drop by your post office to see if this surprise issue comes out.

Wow, another slow day at GPO. Looks very empty with only the regulars. Slow start to the year.

Yes the surprise materialised! The unannounced imperforate MS is released this morning!

This is NOT in your SODA. An order form will be issued later but there will not be an Imperf MS FDC.

Pos Malaysia even arranged to bring out the actual plants:

From the right of the photo is: Belalai Gajah, Misai Kuching and Hempedu Bumi. The left most pot is not identified.

I managed to drop by the Jalan Kuching, Kuala Lumpur Post Office to cancel my Misai Kucing stamps. 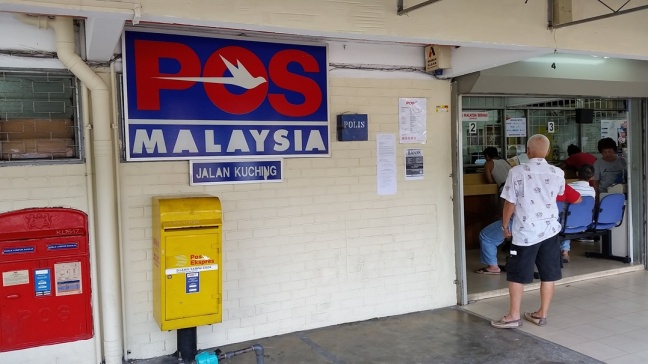 Jalan Kuching Post Office is a typical community post office of the by-gone days. It is set up inside a ground floor lot of a block of flat along Jalan Kuching. Here is the cover.

I am waiting for my other covers from my friends.

Meanwhile did you spot the errors on the stamps and envelope?

In reality the rim of the pots for 70 sen and 80 sen are reversed. Notice the white patch and the crack on the pot? Compare that with the image of the pot on the envelope.

Meanwhile the Misai Kucing (note the leaves) on the envelope grew up to become a Roselle (70 sen stamp).

Did you find anything else?