It was just a week ago that I was in Taiping. This time, I had to return. Except alone as my 2 other collectors were busy. There was not takers for my invitation to join this Philatelic tour.

The tour was almost scuttled by a serious accident near Slim River where 2 overturned lorries blocked 2 out of 3 lanes. The jam lasted almost an hour. This sunk my breakfast and lunch plans. To pass through Ipoh without savouring its delicious food is such a sin!

A brief stopover in Ipoh and the assistance of the Ipoh GPO saw me off to Taiping with everything ready. Taiping? Why?

Taiping was a major town in the colonial times. It has one of the earlist railway connections, the one stop Post and Telegraph Office (refer to last week’s coverage on the opening of the Telegraph Museum) and also the oldest museum in Malaysia! It dates back to 1883! This year the museum will celerate 135 years! Here is an advance information: There will be a celebration of sorts for the 135th anniversary of the Perak Museum. You heard it first from myfdc! Perhaps it is a good reason to buy up more stamps or the envelope?

I managed to send out 5 concordant postcards of the Perak Museum to 5 early email addresses. At least they read the instructions. The brief stop over was just as well as the drive back was plagued by incessant roadworks. This makes the drive back labourious. With one pit stop, it was time to wallow through the end of day traffic crawl. I made it to the KL Philatelic Bureau with 15 minutes to spare. I posted another 5 postcards for the readers. 6 actually, as I found a spare postcard. However, Mail Centre cancellation might be tomorrow’s as it was already the end of the day.

Meanwhile in Melaka, most headed to the tent for the special cancellation. Here is a photo of the tent (Photo credit to Pooi Kee with permission for usage).

Note: The designer, Mr Shahrul Izhar, was at the KL Philatelic Bureau this morning to autograph the products. Photo credit also to Pooi Kee with permission for usage.

Who are the 5 earliest emails for Taiping and Kuala Lumpur special cancellations?

In no particular order:

It should reach you by the end of the week (fingers crossed). 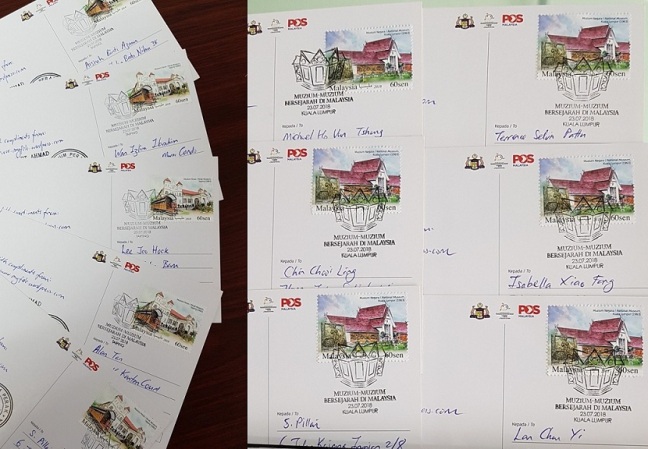 Many thanks for reading myfdc. We present information so that you can prepare your philatelic plans for each issue. We encourage the open sharing of information for the benefit of all collectors. Stay tuned for future issues and ad-hoc activities.

Oh, yeah, those struggling to find the email… hint…. Thoughts in A Warm Welcome to myfdc.

7 thoughts on “Return to Taiping”