Today’s Yang Di-Pertuan Agong Special Sheetlet Series 3 Folder set saw strong demand from the moment the doors were opened. The first round of buyers numbered 48 persons. The queue actually started building before 06:00 am. 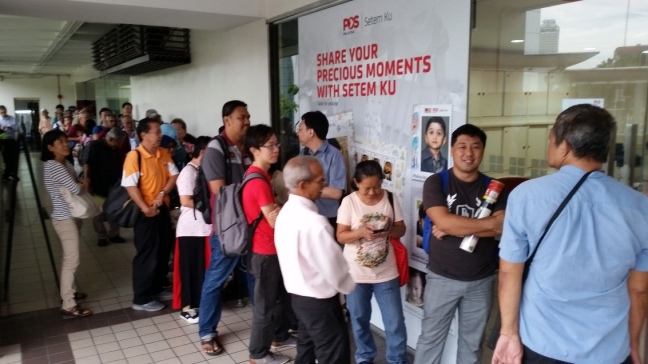 The notice on the glass door informed us that there will be a limit of 3 per person.

Most State GPOs limit the sale to only 1 folder per person.

As the morning progressed, news of the folder being sold out in Penang, Negeri Sembilan and Johor came in. This triggered additional buying by those in Kuala Lumpur. It was not long that at about 10:10 am all folders were sold out.

The designer, Mr Shahrul Izhar, from World Comms came to autograph the folders. The autograph queue was long but moving.

Overall, this issue received extremely good response. The envelope that came with the folder is very handy to make a FDC.

However in the afternoon, news trickled in that the Sultan of Kedah, Sultan Abdul Halim Mu’adzam Shah had passed away. It is indeed a sad news to end the day.

6 thoughts on “A Mixed Day for Royal Philatelic Fans”