The handful of regulars came. There were 2 new faces in the morning.

It was a steady stream of collectors through the morning.

The lobby was being prepared for the launching later this morning. It was decorated with various post boxes in the lobby and outside the lobby.

The designer, Mr KY Lim, came to autograph after 09:00 am. There was quite a lot of collectors who managed to get their covers, postcards, posters and folders autographed.

Here is the celebration at the main entrance.

Meanwhile there was a surprise special cancellation available at the MCMC HQ in Cyberjaya:

As I finished my KL section, I headed to Cyberjaya.

There was a mini bazaar at the side of the MCMC headquarters in Cyberjaya.

The Pos Malaysia counter was prominently at the entrance!

Trivai: Spot where is the special cancellation?

So here are some covers that I made: 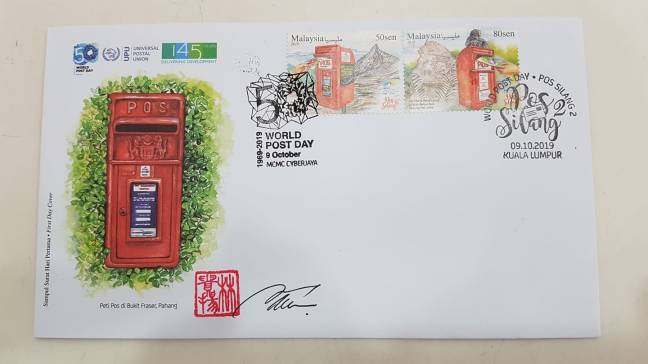 Here is how you will not miss out any specials:

I will post urgent news in myfdc Malaysia Facebook as it is faster. I will have the full news in myfdc.wordpress.com when I have time to sit down and curate. It is only through timely sharing can we make really good covers or maxicards. Late news will not be of much use. Remember the unhelpful neighbour who only tell you about a wonderful sale yesterday? You get the idea.

Any reporting from your location?

I do want to thank Mr Ridhwan for reporting from Shah Alam GPO with an added video, Ismadi Hassan and Jun Hui all the way from JB GPO, Jia Chun from Kangar GPO and Eric Ng from Kelana Jaya!

Here are some photos:

In the media release pack, there was a FAQ on Postcrossing to promote the exchange for postcards.

Did you know that there is a special effect on the folder?

I was caught by surprise until it was explained by Pos Malaysia Comms team and the designer.

The slot at the front of the “post box” folder is to mimick a posting slot. If you push your FDC through the slot it will fit right into the post box inside the folder in another part of the world! The cover has been “delivered”! Nice right? Have look: 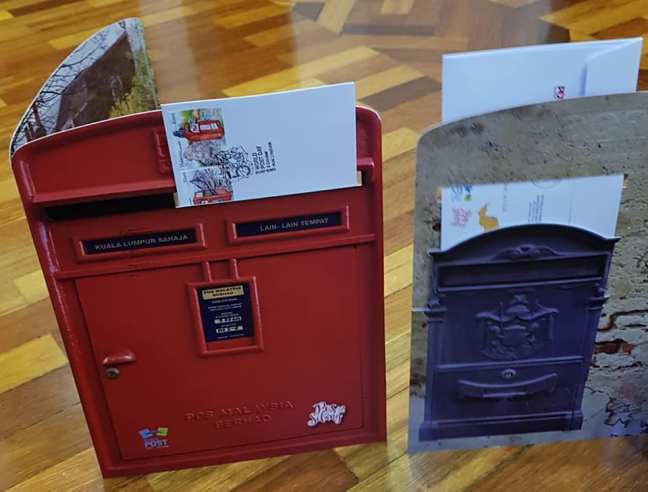