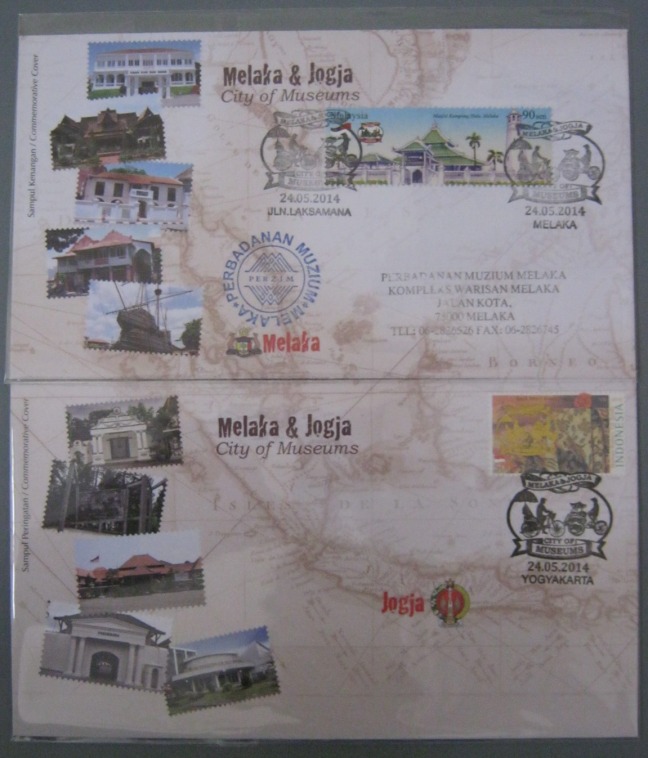 Technically this is a commemorative cover. The date of issue is 24 May 2014 which is a Saturday and thus there will be a next next day cover. I just thought it would have been more realistic to just have the date of issue on 26 May 2014. There will be one 90 sen overprint stamp (from the Melaka 750 issue) and a blank envelope. Here is the image:

As usual, please check with the post office before you go over. Just in case of last minutes changes, need I say more?

There will be a launch of the overprint covers in…..Yogyakarta (also spelt Jogjakarta, the old “y” is pronounced as “j”, if you are old enough to remember…). Here is the news: http://sorotjogja.com/berita-jogja-4036-prangko-cetak-tindih-akan-diluncurkan-di-sonobudoyo-.html

The venue is at Museum Negeri Sonobudoyo Yogyakarta (http://www.sonobudoyo.com/id), Indonesia on Saturday the 24th of May 2014! Any philatelist from Yogyakarta who is interested to exchange covers, just drop me a note here.

Meanwhile …… all is quiet in Melaka. Any news from the ground?

Here is the news of the launch in Jogjakarta: http://www.sinarharian.com.my/semasa/setem-kenangan-melaka-jogjakarta-dilancar-1.283498

There is no news of any issue on Indonesia’s side. So I guess Indonesia and Malaysia jointly launched Pos Malaysia’s commemorative cover. I am still trying to think what is the significance of this issue that even with so many postponements, it is pressed ahead. Anyone care to enlighten?

There was no crowd in GPO today. I think the frequent change of date and “I don’t know” replies made it really hard for the collectors to remember the dates clearly. The situation in Jalan Laksamana was different as the issue was sold out by noon. Anyway there isn’t as much stock as in GPO. I made some covers to cover my collection cost.

Here are some special FDCs available. I have averaged out the cost to make the covers.

I have the original and overprint on FDC cancelled in Jalan Laksamana, Melaka and PERZIM (last batch):

I finally found the news. Yes, Pos Indonesia issued an overprint as well with a similar type of envelope. Here is the news: http://krjogja.com/read/217301/indonesia-malaysia-luncurkan-prangko-dan-sampul-peringatan.kr

Here is the image of the Indonesia cover: 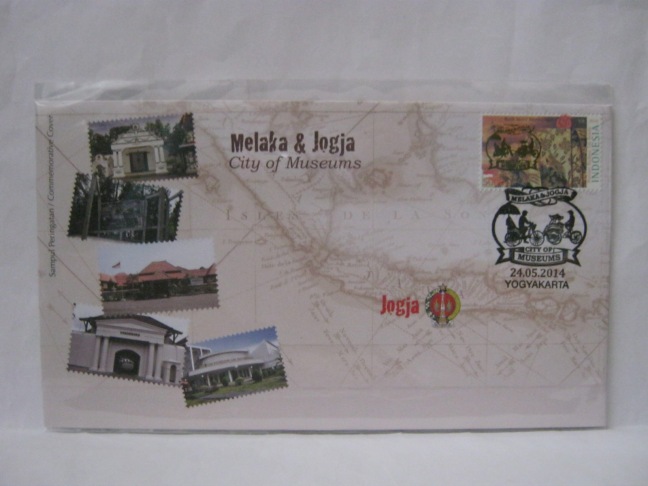 If you out both covers together, you get a map of Malaysia and Indonesia with the emblems of the respective cities on the map. It is a very nice touch!

Now, any collectors from Indonesia or PFI who would like to do an exchange? I am looking for the Indonesia stamp.