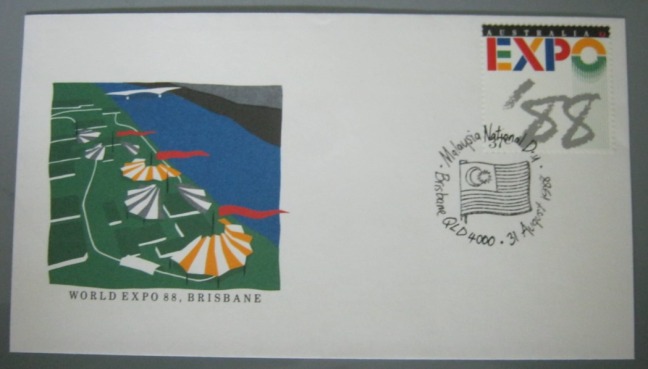 Here is a little trivia. Australia Post did commemorate Malaysia’s National Day back in 1988.

That was during the World Expo 88 in Brisbane, Queensland, Australia. A cancellation that reads “Malaysia National Day Brisbane QLD 4000 31 August 1988” with a Malaysian Flag (with the correct number of stripes!) was made available on the souvenir cover for the Expo.

Technically 31 August was the independence day for Malaya. Malaysia was formed on 16 September 1963. Thus the early stamp issues’ label on Malaysia’s Independence Day was not accurate.

Nowadays the day is known simply as Hari Kebangsaan (National Day) which is more reflective. It was great that Australia Post got the name right.

Here are some other trivias. In the early months of the Formation of Malaysia, the postal slogan “Berjaya Malaysia” or “Malaysia Success” was found on most letters. Sadly many would have lost these precious mails. 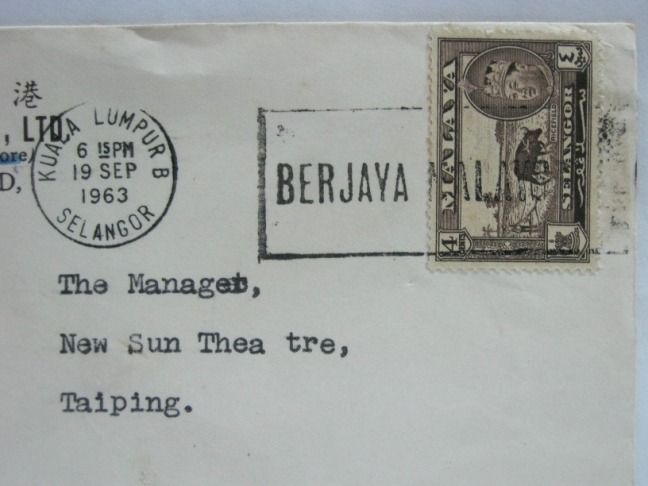 Finally, the Formation of Malaysia was given due recognition in 2010. 16 September 2010 was a the first time in history that the day was declared a Public Holiday to celebrate Malaysia Day! It is significant as it is an acknowledgement of the actual day Malaysia was formed. However, we still get to keep 31 August as a Public Holiday!

As we head towards the 58th National Day (Independence Day or Merdeka Day), here is an updated list of the National Day / Malaysia Day related stamp issues I originally posted back in 2012. It has been updated (of course).

(2) After the independence of Malaya, only one commemorative set was issued in 1958 to commemorate the 1st Anniversary of Independence.

(3) Malaysia was formed on 16 September 1963. The interesting thing is that the envelopes were prepared for 31 August 1963 which was supposed to be the date (which was already a postponement). As the final date was postponed yet again to 16 September 1963, hasty stickers were made and applied on the envelopes. Nowadays the FDCs cancelled in Singapore is very much sought after. North Borneo cancellations are popular too as North Borneo is now known as Sabah.

(4) It was only in 1967 that a set was issued to commemorate the 10th Anniversary of Independence.

(5) The National Definitives (Butterflies) with the denominations of 25 cents, 30 cents, 50 cents and 75 cents were issued on 31 August 1970! There was a scarce hand cancellation “Hari Kebangsaan Ujudkan Perpaduan” (National Day – Create Unity) only seen on postally used covers.

(7) Strangely on 31 August 1980, a Submarine Cable Project stamp set was issued instead of a National Day issue. In those days the Post Office actually opens on public holidays if there is a stamp issue on that day.

(8) The next year on 31 August 1981 the same thing happened again. This time, the stamp issue was on the 100th Anniversary of Sabah. It was more fitting, however it was still not a National Day issue.

(9) On 31 August 1982, the country celebrated the 25th Anniversary of Independence and issued the first miniature sheet in philatelic history.

(10) On 16 September 1983, the stamp issue was again not related to the formation of Malaysia but a celebration of the 50th Anniversary of the Malaysian Armed Forces. My FDCs were cancelled in MINDEF (Ministry of Defence).

(11) The next real National Day issue was on 31 August 1988. The stamp issue commemorated the 25th Anniversary of Sabah and Sarawak in Malaysia. Again the date was not accurate. It should have been 16 September 1988. However in those days, 16 September was not widely celebrated. I have a rare special set of FDCs with Kota Kinabalu and Kuching cancellations.

(12) 30 August 1991, a day before National Day, a stamp issue on the Past Prime Ministers of Malaysia was issued. This issue is very popular and is still in demand. This was to be the start of the issue of patriotic related issues for the National Day celebrations.

(14) On 19 August 2003, a set of stamps and miniature sheet were issued to celebrate the 46th Independence Day. The 30 sen stamp was in the lime light for having too few stripes! The official response was that the flag was fluttering thus some of the stripes could not be seen. Anyway, it is a very nice issue.

(15) 31 August 2007 was the 50th Anniversary of Independence. The stamps, booklet and miniature sheet were very well designed! It was a very popular stamp issue!

(16) On 31 August 2009, the first “One Malaysia” stamps, booklet and miniature sheet were issued. A special launch cancellation was made available in Pasar Seni Kuala Lumpur just opposite the General Post Office.

(17) For the first time in history, a National Day related theme was issued way after National Day. This time the “One Malaysia” series 2, was issued only on 10 November 2012! Strange!

(19) On 30 August 2012 the Malaysian Unity Series 2 was issued. Though it is not directly related to the National Day, it was to coincide with it.

(20) Surprisingly another non-National Day stamps were issued on 31 August 2013. This time it is Museums and Artifacts (50 Years Muzium Negara).

(21) On 16 September 2013, the much awaited 50 Years of Malaysia single 60 sen stamp was issued. This is a very appropriate issue and the second time that the formation of “Malaysia” was commemorated with stamps on the auspicious day. The first time was on 16 September 1963! That is a gap of 50 years. I did not count the 31 August 1988 issue as I considered that the incorrect date.

(23) This year’s Malaysia Day issue is planned on 15 September 2015. The original theme was “Founding Fathers”. This has been changed to “National Day and Malaysia Day”.

In conjunction with the National Day and Malaysia Day, I have been listing offers every week.

Here are some highlights this week:

Check out the listings:

Meanwhile, if you have any interesting story to share, just drop me a note.