There will be a launch of the Batang Kali Post Office with YB Tuan Gobind Singh, Minister of Communications and Multimedia at about 3:00 pm today. 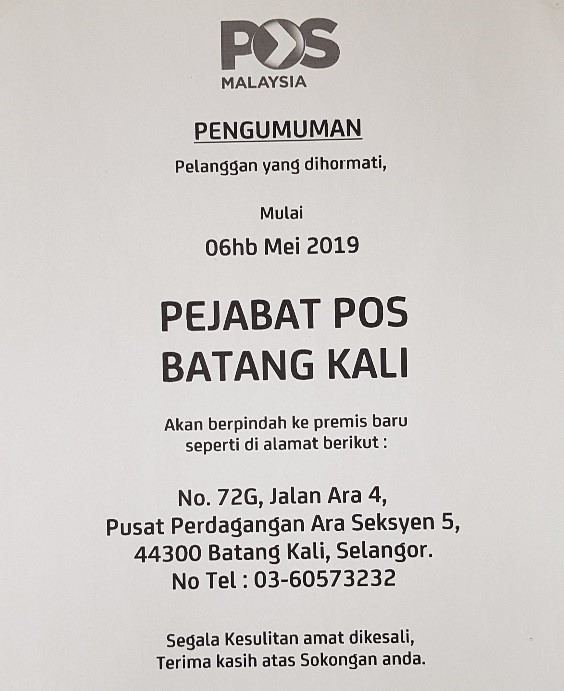 Half the length of Jalan Ara 4 was set up with tents for a Majis Mesra Aidilfitri organised by the offices of the Kuala Kubu Baru (Bharu) and Batang Kali State Assembly Representatives; YB Puan Lee Kee Hiong and YB Tuan Harumaini Omar.

The rear of the tents were packed with the public. The public was treated to a buffet of traditional delicacies.

The new post office premises were offered by the Ara Business Centre’s developer, JRD Development Group Sdn Bhd. Here is the premise, ready for the launch.

On hand to welcome the Honourable Minister was the Chairman of Pos Malaysia, Datuk Yasmin Mahmood along with both State Assembly Representatives and the JRD Group Director, Mr Ivan Kok. On arrival, YB Tuan Gobind Singh Deo, went around to mingle with the crowd and visit the post office.

This was followed by the official launch ceremony. Here is the opening speech by the Honourable Minister.

For the philatelist: The new post office continued to use the old Batang Kali cancellations.

What about the old post office? Hmmm… here is the photo while passing by: