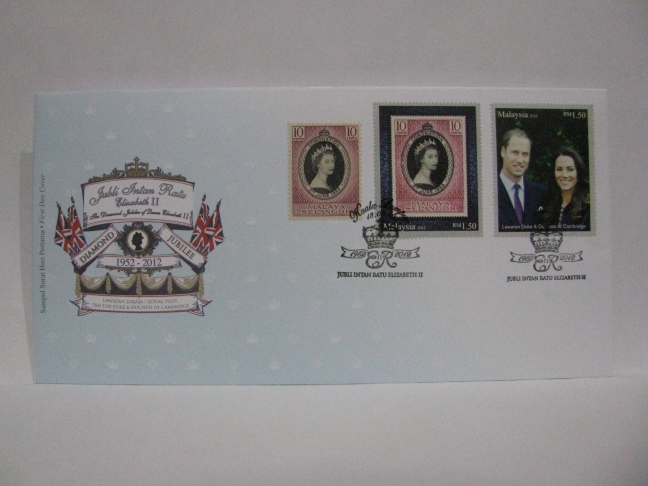 The sales was slow and tedious. Pos Malaysia to its credit showed its caring side again. They opened a senior citizen counter! Great job! In fact after 3 hours, Pos Malaysia distributed bottled water! Now that is a good corporate citizen! I kept the empty bottle as a souvenir! Here it is:

As the queue snaked slowly…time passed. We realised there was a limit to the number of sheets that we can buy (as well as the full set folder). Okay, let’s see what is going on.

3 hours later, I am right in front of the counter and yes there is a limit. Later a fellow collector acquaintance informed me that there was an change in the design of the Royal Visit emblem! Here see for yourself! 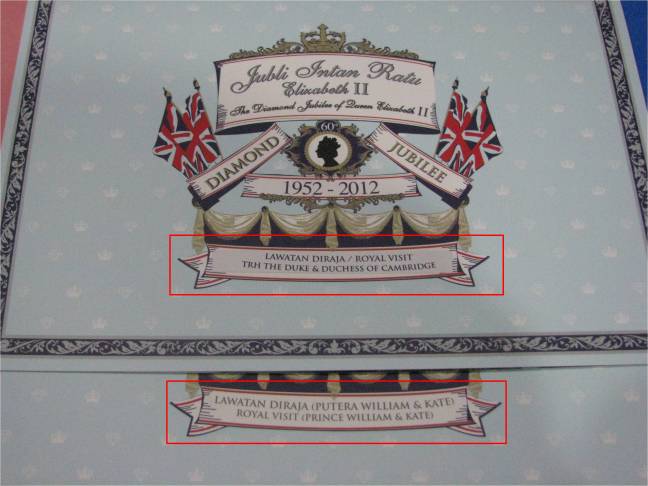 The above is the Folder cover. As the folder could not be reprinted as quickly, a sticker was put on top of the original printing. The posters, banner and original image (hopefully you can still see the original image on Pos Malaysia website) were all printed with “Royal Visit (Prince William and Kate)” versus the revision “Royal Visit TRH Duke & Duchess of Cambridge“!

The envelopes were reprinted. The folders was stuck with a fresh sticker and the sheelets! Oh my…So Pos Malaysia stopped the original sheetlets and asked the post offices to tear off the stamps to sell as loose stamps. Anyone with the Prince William and Kate sheetlet? I would like to buy one or exchange with a rare FDC with the original Malaya Selangor stamp.

Very few reprinted sheetlets were available and thus the limit of one set of sheetlet and one full set folder per person. Here is the emblem of the reprinted sheet.

Now you know the story. Okay, I need someone who can verify and give me the other half, why the change in the emblem? I could not authenticate the versions so I leave it as it is.

I finally finished 4 hours after I arrived. That would be at 12:30 pm! The queue was still stretching!!!

I went over to KLCC to get the KLCC cancellation (as 14 September 2012, there will be a meet the public session). I then went around town and ALL the post offices told me the stamps were sold out when sales started. Less than an hour!

I told you it was hot! Those who pre-ordered early, I have delivered on the same day in Klang Valley (I am trying to avoid the delay in sending via Registered Post due to Malaysia Day holidays on Monday!).