The earliest Lunar New Year (LNY) greeting by Pos Malaysia was in 1991. Pos Malaysia used postal slogans near the LNY month on the frankings for all mails. Here is an example:

In 1992, Pos Malaysia changed the corporate logo thus the franking was changed as well:

The greeting slogans continued every year until 2000 when the slogan was changed:

I found the last LNY greeting was in 2002. The envelope was also taxed due to insufficient postage.

It was also in 2000 that Pos Malaysia issued the first LNY stamp issue. It is the now famous Year of the Dragon stamps and miniature sheets. Here are the sheets: 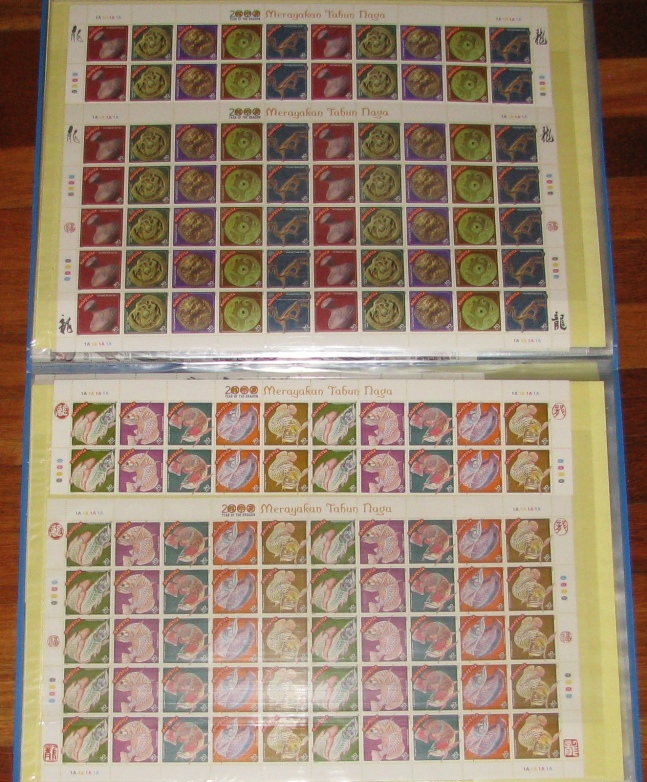 For the complete visual of the collection of covers check out this link: https://myfdc.wordpress.com/malaysia-first-day-covers/1991-2000/2000-2/

2001 was the Year of the Snake but for some strange reason the Snakes stamps and miniature sheet (perforated and imperforated) were issued in 2002. Missed opportunity?

Pos Malaysia was back – discreetly with the Southern Serow stamps. The LNY greetings were printed at the margin. However this series was not well received. 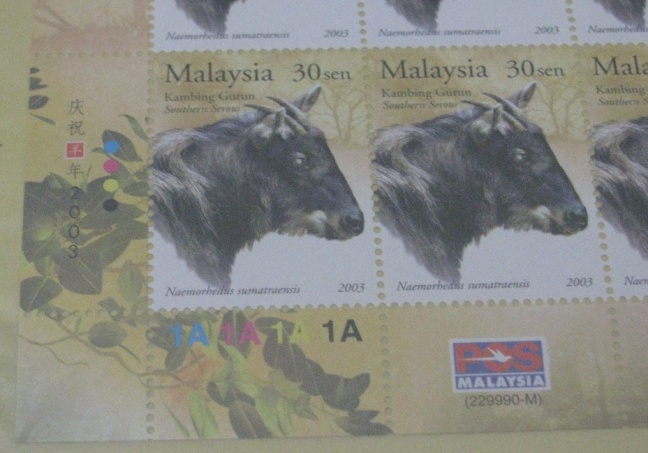 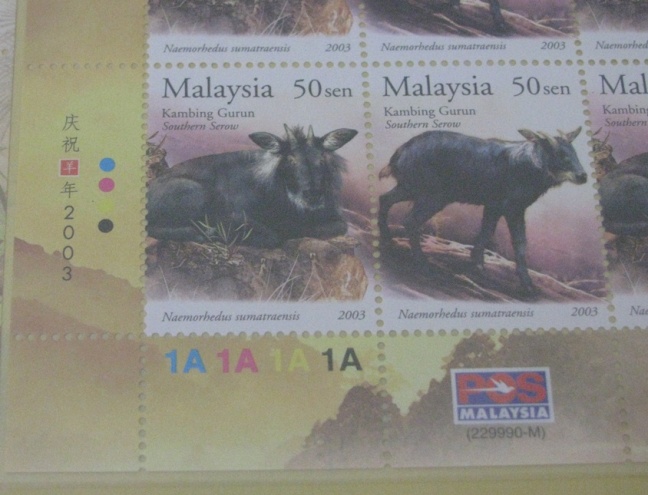 It was going to be a long time before anymore LNY stamps were issued.

I missed this in my initial write up. There was a tiger issue during that year and it was a joint stamp issue with Korea on “The 50th Anniversary of Malaysia – Korea Diplomatic Relations”. For visuals of the various covers check out: https://myfdc.wordpress.com/malaysia-first-day-covers/2001-2010/2010-2/ 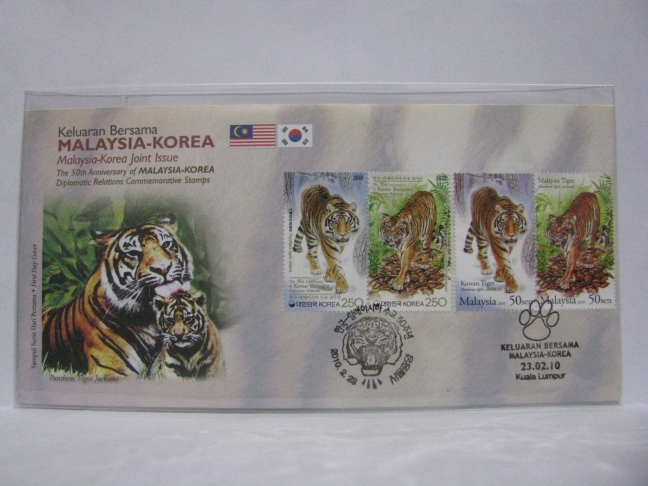 In 2011, Pos Malaysia using the guise of Children’s Pets slipped in the Rabbit stamps in the 60 sen stamp and RM 5 miniature sheet. The initial response was poor and it was after a few weeks that non-traditional collectors realised this and started to buy the series. The FDCs ran out but the stamps can still be obtained today. Some MS can still be found.

Here is a composite FDC:

As usual the demand in the Year of the Dragon is unusually high. Non-collectors also came in droves to snap up the series sneaked in as Legacy of the Loom. 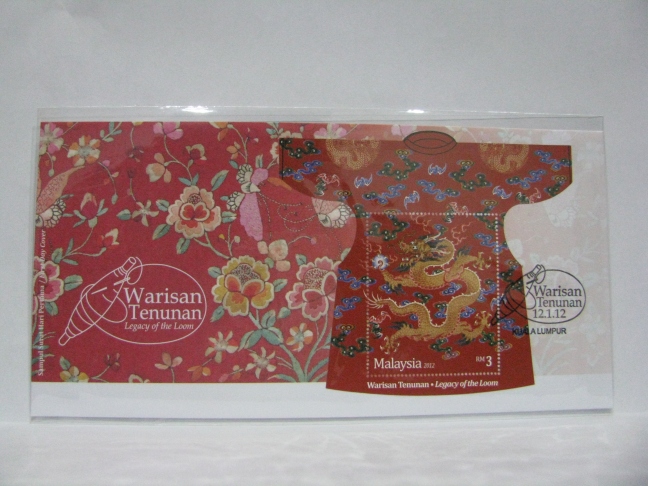 For visuals of the overprints issued in exhibitions, check out: https://myfdc.wordpress.com/malaysia-first-day-covers/2011-2020/2012-2/

In the Year of the Horse, the title was aptly called Horses.

In the Year of the Goat, the title of the issue was Farm Animals. This will see an expensive set of RM 3.00 and RM 15.00 Miniature Sheets! Stay tuned for the image.

Setemku is bolder in printing out the Lunar New Year sheetlets. The first attempt was in 2011 in the Year of the Rabbit. The original print had wrongly worded phrases but were recalled before it was sold, so no luck on unissued. Since the promotion was not enough, not many knew about this. However Setemkus are only sold for a certain period of time (unlike the normal stamps), thus you will not be able to buy these after the sales period. 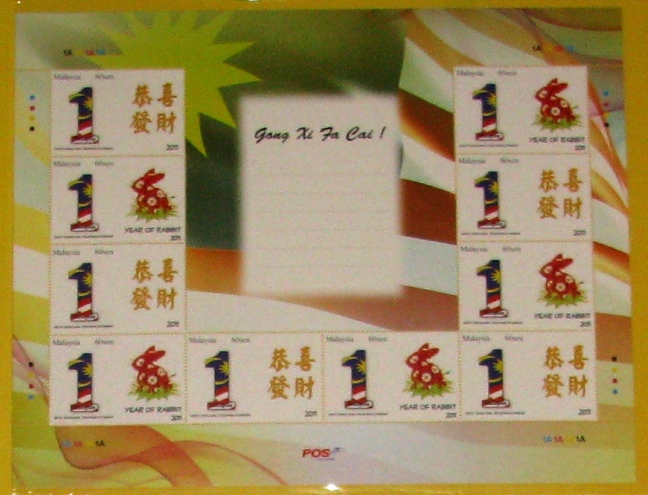 This was so hot, it was sold out on the same day as the Legacy of the Loom day of issue!

This is the current issue. 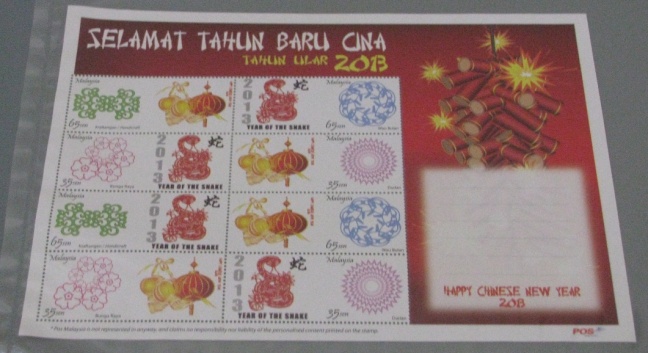 Thus Setemku is only 3 years in the running. There was no Setemku on 2014.

Did I miss out anything? If you have more to share, just drop me a note. Our readers will  be very happy to hear different views.